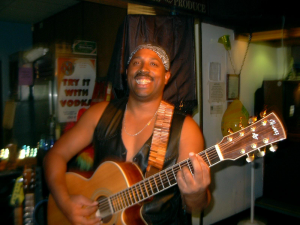 Predice Hendricks is a professional musician and licensed inventor of the patented “Acoustic Tremolo System“.

Born on June 8, 1967 in Hampton, Virginia, Predice got his start in music by playing drums by the age of 6. At 9 he picked up the Bass, and at 10 the Guitar. He later went on to learn banjo, mandolin, upright bass, and piano and keys.

A 1968 graduate of Phoebus High School, Predice has been actively performing since the age of 17.

His bands include: 80 Proof an 80’s Metal Band, Destiny a Rhythm and Blues and Funk Band, Silver Thorn a Rock Band, Wonder Twins a Punk Rock Band, Funk Junkie an Alternative Hard Rock Band, Under the Influence a Metal Band, Filler Up an Acoustic Trio and several Variety Bands: That’s Cool & Stuff and Joes on Call.

Many of these performances were on the same concert bill with well known bands like: Burning Spear, Third World, Skid Row, L.A. Guns and Mini Kiss.

His dedication to studying various styles of playing guitar, along with extensive research; helped him in developing his own unique style, technical ability, and working knowledge of guitar.

This, combined along with over 25 years carpentry work experience, became the cornerstone in developing the unique Acoustic Tremolo guitar system design, having features like no other acoustic guitar.

Predice began the patent process for the Acoustic Tremolo in 2003 and received patent-pending status in 2007 and was finalized in 2010. Since then, Predice has obtained 5 other patents. The first prototype of the Acoustic Tremolo was built in 2011 and has since has been slightly modified 5 times to its final version now available for purchase.

© Copyright. The P.H.A.T System | Predice Hendricks | Inventor of the Acoustic Tremolo System
+ Subscribe To Our Newsletter

Subscribe to our email newsletter today to receive updates on The Phat System and special offers!
No Thanks